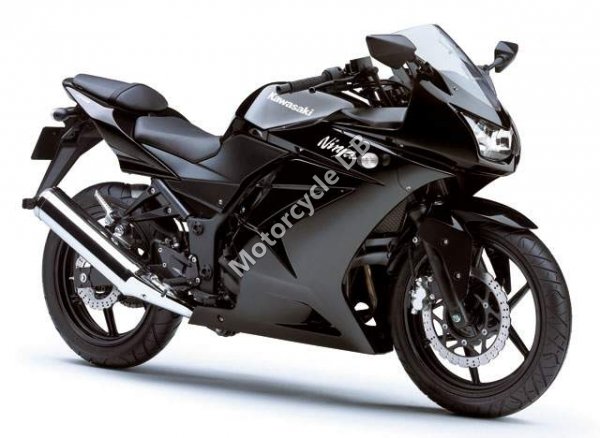 Add/Upload pictures for this motorcycle
Kawasaki

Twenty-five years is a long time for any product in any modern industry; as your finances know well, a mere two years is about all one can expect from most higher-end items bought today - your mobile phone, the Blu-Ray player, etc. In the motorcycle industry, a major manufacturer that produces a bike for a quarter-century with few, if any, changes only does so if the bike in question continues to sell well. The Kawasaki Ninja 250 was such a machine; it was a brilliantly simple and functional motorcycle which stood as friendly to beginners and fun for the experienced - and it was and is the top selling Kawasaki, and most purchased 250 cc sportbike in all of the known universe. In 2008, however, Kawasaki took a winning package which they could barely keep on showroom floors and evolved it into a mold more fitting for the 21st century.

After dominating the entry-level sportbike market for over two decades, Kawasaki did not want to ruin the good thing they already had in the Ninja 250, so they approached this update carefully. The liquid-cooled, 249 cc parallel-twin engine has had over 70% of its internals altered, but every bit of that was to lighten things up, improve tolerances and materials, and add a mild increase in and leveling-off of power delivery. The resulting power curve is smooth with nary a lump in the torque or horsepower lines, and it is a friendly, yet exhilarating (for a 250 cc four-stroke), powerplant. Kawasaki managed to improve every engineering aspect, and the engine in the Ninja 250R is well-sorted, well-built, bulletproof, and never will you feel too timid to rev it to its 13,000 RPM redline. It also merely sips fuel doing so, with an efficiency rating rivaling even the best hybrid automobiles.

The most noticeable change to the new Kawasaki Ninja 250R is the appearance; a significant amount of work went into redesigning the fairing and bodywork for both excellent aerodynamics - yes, even on a small bike, airflow is important - and sly style. That trick comes from its incredible resemblance to its larger displacement siblings and there is not even a "250" to cue in the uninitiated that this is the smallest Ninja. The changes were well orchestrated and the hands that formed it deserve accolades. Some of this enhanced image, not to mention improved overall performance, is definitely due to the new full-size, 17-inch wheels and the also new and far more lightweight 2-into-1 exhaust. Kawasaki took what many considered to be a "good starter bike" and created a motorcycle which easily lives beyond its size in the eyes of those who are privileged enough to own one. The Ninja 250R has come of age and is ready for serious sporting fun - maybe a track.

One note about the Ninja 250R's fuel system: the U.S. model has to make do with a pair of Keihin CVK30 carburetors instead of the fuel-injection which is standard on every other model sold in the world. Some say this is due to some arcane EPA rule, but fuel-injection burns far cleaner and the Euro standards are far stricter than anything on the books in North America.

Riding the Ninja 250R is a fun ride. It gives the rider enough confidence to really push it to the limits of the law in pursuit of ever better lines, deeper leans and pure joy. This is mostly due to its very lightweight superbike-inspired design, and Kawasaki has definitely imbedded what it has learned producing high-performance machines for the racetrack into this bike destined mostly for the street. What one cannot get over is the comfort level; shorter riders will feel right at home, and even though the tall among us will sit upright with the stock setup, they can still wrap around the Ninja 250R tank and go low for running things fast at a track day.

The technical aspects of the Ninja 250R are impeccable for its size and more so considering the budget pricing. A solid, slick-shifting and fully updated six-speed transmission puts power to the rear wheel via a sporting chain drive. Suspension is good as long as you are not an NFL linebacker, but only rear preload is adjustable. It handles all but the worst roads well, though, and works out as an excellent commuter. Taking all of this in - its well-known reliability, excellent efficiency, performance-oriented design and handling, and its race-inspired good looks - the Ninja 250R is really a perfect motorcycle for its category, and you cannot go wrong choosing the baby Ninja as your bike.

Kawasaki sells the Ninja 250R for US$3999, or $4299 for a special-edition graphics package, and it is a bargain at that price. The unadulterated pleasure of riding a motorcycle as well thought out as the Ninja is worth much more than money can buy, the Ninja 250R will put a smile on any rider's face which may never go away.